The Future of Journalism and Fashion

In the first session of the day, I learned about the integration of Artificial Intelligence into the world of journalism. While everyone is afraid that robots are going to take our jobs, that isn’t a concern, at least not for the next couple of years! The biggest things I took away from this lecture was that the data that the codes for artificial intelligence is based on was created by humans so if those humans have biases it can show up in the types of information that can be understood by this technology. One of the presenters used the example that you can dictate to certain technology and it will produce the story for you but not all dialects are understood so that technology isn’t useable by certain people. The second thing was that formula stories are much easier to produce with ai, for example, high school sports or maybe committee meetings because those stories have a formula and are usually written the same way every time just replacing old details for new ones. Whereas obviously ai is not good for stories with lots of nuance or stories that need to be frequently updated.

My favorite session of the day was the origin story of Universal Standard clothing company. These two lovely ladies started it after one of them showed the other that there was only a limited section in one department store where she could shop for clothes. They now serve woman from size 00 to 40. The main goal is basically for there to be no more “plus sized” talk and no more of the us versus them mentality but to be able to clothe as many people as possible and make them feel good. They discussed clothing as not just some fabrics you throw on but something that shapes you and becomes part of your identity and can assist you in being the best version of yourself and putting you best foot forward. I was on board for all for it. From two ladies with no fashion industry experience to owning and designing their own brand that has had a partnership with J. Crew, I was beyond inspired. Maybe you’ll see me start my own label? 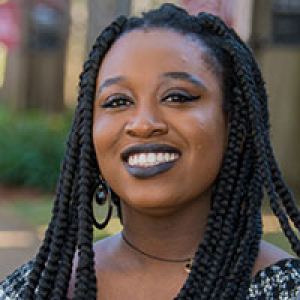 Drew Hill is a third-year broadcast journalism major. She enjoys going shopping and going to concerts as well as getting her daily coffee fix. She never leaves home without her headphones. In the future, Drew hopes to work on writing online content for a fashion or music magazine or becoming a radio host.
PrevPreviousDay 2: Saturday
NextReady, Set, Activate!!Next
Skip to content