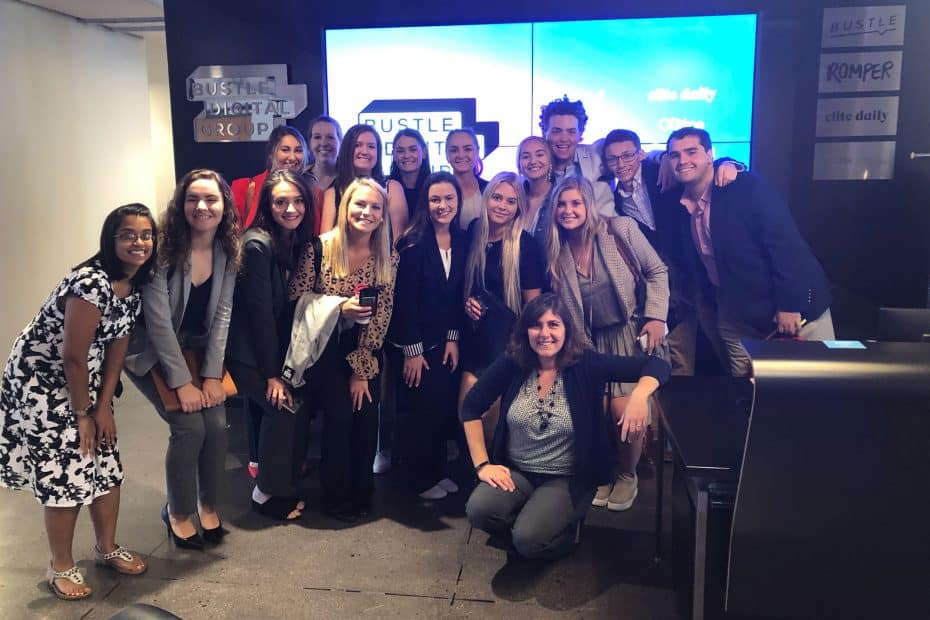 The University of South Carolina New York City Maymester group was blessed with the opportunity to meet one of the top news, content producing digital groups of our modern day society, Bustle. Jason Wagenheim showed us around, he had an awesome personality and was very easy to relate to. We fired quite a few questions his way and he crushed each one, I guess he has some sort of experience in his career.

The experience Jason has is rather impressive. He worked for many big magazines and incorporated a lot of humor in telling us about it. After drastic changes in the magazine industry, some very challenging, he’s at the happiest point of his career with bustle.  Going from 0 to hero was a great way to show all of us no matter how unhappy you might get or where you might end up, everything really will work out in the end if you put the right amount of work.

Something my classmates and I enjoyed was the main beliefs of bustle and what they were doing to support these beliefs. They preached diversity, inclusion and body positivity which is like a breath of fresh air compared to the toxicity one might see in current and past news articles/magazines. They have designated days of doing community service and even a program called BDG cares where they designate there community service program through. They also have specific days set aside for each employee where they take time to get their head on straight and take care of their mental health. Additionally, many of their reports/articles include representation of all varieties of women so that each and every one can feel heard. These articles are put out not only bustle but also the brands that fall under the bustle digital group umbrella such as romper, elite daily, mic and 5 others. I found it especially interesting how tenacious and aggressive they are being with their attempts to acquire even more platforms and brands to spread their messages through. They said that they plan on having 20 brands total within the next two years. Amongst these brands that they do have, they bring in 55 million consumers a month consistently which has made them very hot in the press and helped them win some awards, the most recent one being Romper which one the National Media Partner of the 2019 Mom 2.0 Summit. They’re so good with public engagement and explain so making one of their quotes: “we know her because we are her”. They are good at relating to women so well because that’s who they’re made up of. In total they have 300 writers from all over the world who write for them. These writers are freelance and get paid for the story. Jason represented his company very well by being inclusive, responsive and overall very pleasant to engage with. We appreciate what he did for our group, and what Bustle does for our generation.
Skip to content