All Roads Lead Back to Rome

Water slithers between stone wedges of narrow alleyways as tourists huddled in a group chase their expedition leader whose Daffy Duck stuffed keychain beckons them down yet another path. The fictional character bounces atop a raised pole as its plastic eyes survey the classical architecture framing the plaza. Steeples pierce the Roman skyline, and centuries-old crosses dapple the velveteen horizon like daggers raised in defense of invasion. For as high as the symbols of religion reach, the roots of Italy grow even deeper, and it all starts at a basic invention—the road.

The Appian Way, also referred to as the “queen of the roads,” was laid in 312 B.C. and stood as the symbol for empiric expansion. Its intention served as an exchange route to swap supplies between Rome and its allies during war, but as Rome continued its conquests of neighboring cities and occupations, the Appian Way began splintering into diverging branches, creeping outward like new growth on a grape vine. Messengers ran marathons between cities, often traveling as far as 20 miles a day. Because of these new shortcuts carving the rugged European terrain, the efficiency of the Roman government and military power dominated above all.

In addition, the Romans were brilliant engineers, and their roads attested to this attribute as they were a far cry from haphazard. The roads crowned in certain locations to allow for proper drainage, and the layering system of materials was truly ingenious. Evan Andrews of the History Channel describes the brilliance:

The bottom section of the road was usually made of leveled earth and mortar or sand topped with small stones. This was followed by foundation layers of crushed rocks or gravel cemented with lime mortar. Finally, the surface layer was constructed using neatly arranged blocks made from gravel, pebbles, iron ore, or hardened volcanic lava.

The builders added mile markers to convey the distance to the nearest Roman city. At the epicenter of the roads, Emperor Augustus had a grounding stone, decorated ornately in bronze, placed in the Roman Forum. The stone marked the distance to all of the gates in the city and their locations. “Posthouses,” locations at which travelers could switch tired horses for fresh ones, were distanced ten miles apart along the roads. Inns were also established by the state as an extra source of revenue. As a final touch to the brilliantly constructed system, Roman guards patrolled the roads to ensure safety to travelers and, of course, to collect tolls as the Empire was always in search of monetary growth.

All 53,000 miles of road led back to Rome, even in the fourth century. 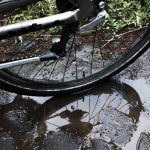 The rain makes the ancient Appian Way stones glimmer. The stones were placed around 300 B.C. to provide easier transportation for the Roman Military. 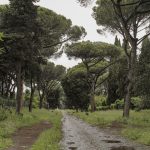 The ancient Appian Way is still used for transportation for walking, driving, and biking. The road served as part of the marathon race in the 1960 Summer Olympic Games 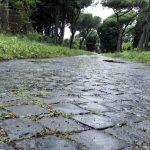 The Appian Way is one the oldest roads from ancient Rome. It was formally called “appia longrum regina viarum” or “the Appian way the queen of the long roads.” 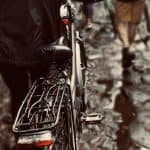 SJMC students from the University of South Carolina take a break from riding bikes in the rain to hear from the tour guide along The Appian Way.