Warner Bros. Studios is one of the premier media companies in the world. It rivals Disney in the sheer fact that it has its foot in as many doors. From movies and television to comic books and video games, Warner Bros. (WB) does it all. In order to be that multi-dimensional, WB has over a dozen different departments that work together in harmony in order to stay relevant. The WB Media Sales department is the proverbial conductor of the entire company, making sure that the content that WB creates can be viewed by the public. On the final day of our trip, Dr. Habib made sure we went out on a high note, setting up a visit to the Warner Media headquarters.

The real treat, however, was getting to sit down and have an engaging conversation with Executive Vice President of Media Sales and Gamecock Alum John O’Hara. John graduated from the School of Journalism with a major in advertising in 1982 and spoke fondly of his time on campus. Since graduation, he has worked everywhere from CNN and BET to Cartoon Network. John spent over 24 years at Turner Media as a Senior Vice President and General Sales Manager before landing his current job at Warner Bros. As an Executive Vice President, John has a wide range of responsibilities. From managing and developing the National Advertising Sales offices all over the country, to forging relationships between potential and existing clients and agencies and so much more.

We started off by talking about skill development at the different stages of your career. This starts right after graduation during the job search process. We talked about the importance of defining your passion right out of the gate, while also keeping an open mind. This translates directly to targeting prospective companies to reach out to. John was adamant about the importance of researching any company that you get the chance to meet with. That way you can impress potential employers with your knowledge and stand out as an applicant. But most importantly you need to be yourself. John talked about how nothing can knock a candidate off of the board quicker than not being genuine.

This development does not stop once you’ve landed a job. John made three things very clear that you need to do throughout your career. The first practice that he preached is taking every opportunity to better your life, whether that be in or out of the office. One must always have a “selfish agenda” as John expressed it, meaning that you must pursue every avenue that can benefit your career or your life as well. His second golden nugget of advice is to try and find a mentor, which does not mean asking your immediate superior to be your mentor but merely finding someone in your field who inspires you and is willing to help you grow in your craft and as a person. He also asked that if and when we get to be that successful in life, that we look out for people to mentor. Last but certainly not least, as John stated over and over, he told us to always be a student of the game. He implored us to not only constantly be looking for ways to improve ourselves but also to not shy away from those who have something to offer us. Now I do not want to speak for the rest of the class, but I know that the advice that John gifted us with is something I will take with me for the rest of my career. 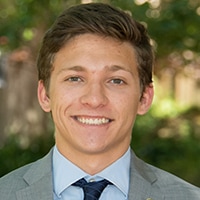 Jack Taylor is a senior broadcast journalism major from Charlotte. An avid sports fan, he hopes to pursue a career in sports journalism after graduation.
Skip to content